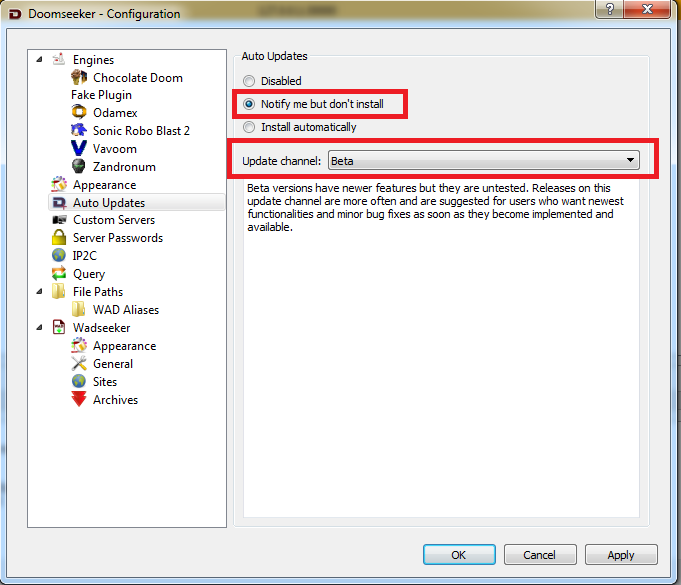 Demo 1 is the first demo version of SRB2, released in November 2000. Whereas SRB2 Halloween and SRB2 Christmas had been mainly intended to showcase the progress on the engine and had contained levels that were never meant to appear in the final game, Demo 1 was the first version to start work on the Single Player campaign. It contained only one map, an incomplete version of Greenflower Zone Act 1 that ended at what is now the tunnel with the second Star Post. Although it contained a Level End Sign, the level could not be completed.

By Demo 1, more progress had been made on the game engine, which had been ported to v1.30 of Doom Legacy and was now more stable. The water physics had been adjusted to be more in tune with the classic Sonic games; the player would not sink slowly underwater but instead fall to the floor at a normal speed. Enemy chains were implemented in this version; killing multiple enemies in one move (for example by bouncing off them without touching the ground) would now increase the score awarded for each enemy. At this point, killing multiple enemies while invincible did not yet count as a chain, but doing so with a spindash did. Tails, who had been present in SRB2 Christmas, was temporarily removed as a playable character, only to return in the next demo. While not featured in Greenflower Zone Act 1 at this point, FOFs were also implemented in this version, allowing for multiple floors per sector for the first time in SRB2.

Graphically, Demo 1 also saw several changes. GFZ's characteristic checkerboard wall texture, GFZROCK, was added, replacing the rock texture that can be seen in SRB2 TGF, SRB2 Halloween, SRB2 Christmas as well as a trailer for SRB2 featuring GFZ itself shown earlier in the year for the Sonic Amateur Games Expo (SAGE)[1]. More sprites were added for Sonic, although some (such as his waiting sprites) still used the placeholders from Sonic X-treme. Doom's screen fading effect (where the old screen gave the impression of being melted away) was removed, a new title screen was added and a title card had been created for GFZ1 (at that point, title cards still had to be created specifically for each level in the source code).

A Chaos Emerald was placed directly in GFZ1, in the same place where the Special Stage Token is today. However, since GFZ1 could not be finished, there was no proper way to collect all seven emeralds in this version. However, just like in SRB2 Christmas, players could type the cheat code IDKFA on the screen (without opening the console) to get emeralds.

A CD Audio Pack download was once available for Demo 1, which included digital versions of some of SRB2's music in the MP3 format. These were intended to be placed on a CD, so that SRB2 could play them back with its CD music playback features, as it did not yet have support for digital music in WADs themselves.

These were the included tracks:

No Track 1 was included; it was intended that SRB2 itself or a placeholder blank audio track be placed as 'Track 1' on the CD.

Important note: The official SRB2 site now offers their own Mac port of the game. This port is now outdated and has been discountinued.

Here is a Mac OS X port of SRB2 2.0.1. It was the version currently available on the SRB2 website at the time this was released. It requires Mac OS X 10.4 or newer to run, and it is a Universal binary for both PPC and Intel Mac's. An Xcode project with the changes needed to compile the 2.0.1 source is also included.

Also available is an application-only download for those of you who already have the Windows version (or 2.0.0) and don't want to download all of the game data again. Just put the application in the same folder with the Windows version, and it should work. If you have the mac version of 2.0.0 and want to update to 2.0.1 without re-downloading the entire game, right click (or control click) on 2.0.0 and select Show Package Contents. Inside the Contents folder, there is a folder called Resources. Take the Resources folder, and copy it into 2.0.1 in the same place as it was in 2.0.0.
Last updated July 25th 2009.